Learn all about our Green Energy source 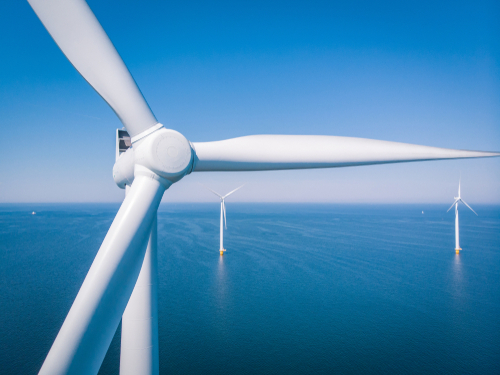 When you enroll as a Discount Power customer, you have the opportunity to make a positive impact on the environment by signing up for one of our Green Energy plans. These options, available throughout our service area of CT, MD, MA, NJ, OH, and PA, allow you to feel good about the electricity you are using in your home for everything from lights to your TV and computer.

100% of your electric usage will be offset by carbon-neutral, wind-generated sources. It’s easy, it’s safe, and it’s 100% pollution-free. This wind energy can come from wind farms on land, but it can also be generated by offshore winds, too! Here’s some information about just how that works:

According to the National Renewable Energy Laboratory, offshore wind energy generation can exceed 2,000 gigawatts of capacity, or 7,200 terawatt-hours per year of generation.

With those plentiful offshore wind energy resources, offshore wind turbine components are scaled up to take full advantage of them. They can reach heights of nearly 550 feet!

Floating offshore wind platforms let wind energy be generated in deep waters. Multiple companies in the United States are developing them as we speak. Why is this a big deal? Conventional wind energy generators are cost-prohibitive when the depth of the water is 100 feet or more. Floating platforms for wind energy development are cost-efficient, and have a lower risk, meaning wind energy will be more attractive to investors. That helps the wind energy industry continue to grow.

Offshore wind farms don’t have to be in deep water

Sticking close to shore has its advantages. Forty-three percent of the offshore wind potential in the Atlantic Ocean is found at 100 feet deep or shallower.

How offshore wind farms get energy to the grid

Offshore winds are in sync with us

The wind offshore has good timing. Those offshore winds are commonly at their strongest during the day. That means a more stable, efficient generation of energy can be done when consumer demand is at its heaviest. Conversely, land-based wind resources are stronger at night.

Offshore wind resources are where people are

Almost three-quarters of the electricity consumption in the U.S. occur in its 28 coastal states because that is where most Americans live. With offshore wind resources located nearby, wind turbines off the coast need shorter transmission lines to connect with the electrical grid than most other sources of electricity.

With a Discount Power Green Energy Plan, all your electricity usage will be offset by carbon-neutral wind energy sources. Thus you will be a part of developing sustainable energy resources!

Exercise your power to make a difference when it comes to your household energy. Be a part of the solution and enroll in a Green Electricity Plan from Discount Power and know that your energy source is clean – and green!